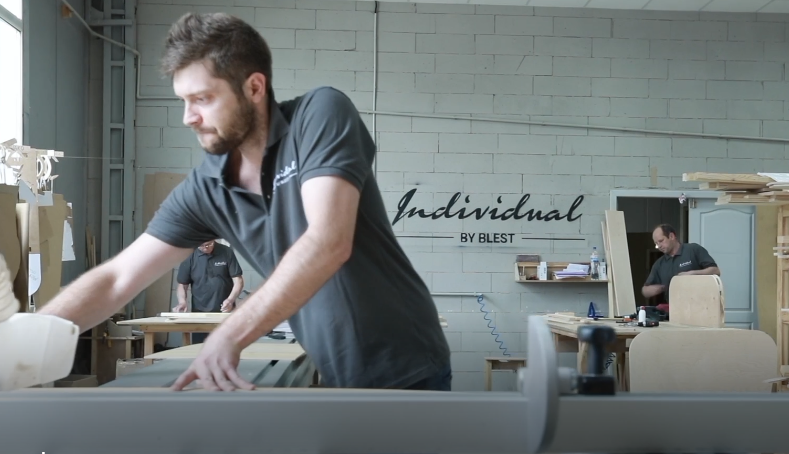 Blest’s history began over 20 years ago. It is currently one of the largest Ukrainian manufacturers of upholstered furniture that is popular not only in Ukraine but also abroad – in Slovakia and recently in Canada. High quality, a solid reputation and ambitious plans for the future – this is all that Blest is about.

“The very beginning of furniture production was back in the 90’s when it was a modest production in a small garage. The first sofas were sold at the open marketplace; there are even photos of our sofas standing in the snow. The company has not been operating under the same brand over the entire 20 years. We had a few names, the name Blest appeared in 2005”, – says Serhiy Savchenko, owner and director of the company.

In the early 2000s, the Ukrainian furniture market wasn’t highly competitive, but the business was steadily developing. Production began and continues at a factory in Cherkasy (Central Ukraine). Production volumes have doubled over the last 12 years.

The company is currently working in several areas, the main being the production of upholstered furniture in the mid-price segment. The premium segment called Individual by Blest is also under development. At the experimental production site near Kyiv, more expensive sofas and beds are made, the design of which is developed individually at the client’s request. Children’s furniture is manufactured under the Blest Kids trademark.

“Trends in the furniture market are changing in Ukraine. Some 5 or 6 years ago, the mid-price segment was core at the market, whereas now more and more manufacturers move towards low-cost lines. Why so? We are moving towards Europe where consumers are not used to spending too much on furniture. The Soviet approach to buying expensive furniture that would serve for 30 years is getting obsolete. Consumers, especially young people, are ready to buy inexpensive practical furniture, which they will replace in 2-3 years with something new and trendy”, Mr Savchenko says.

The company is also actively developing a network of its own showrooms where customers can see the products, choose a convenient model, size, fabric, colors and more.

The company buys almost all materials except for the fabrics in Ukraine. From 2010 the company started to collaborate with the Italian studio Lauriero Design. Besides, Blest company has created a design and innovation service headed by the Italian designer Domenico Lorato.

The next step for the company’s development was entering foreign markets. Like most Ukrainian companies, Blest decided to try its hand at CIS markets – Russia, Kazakhstan and Moldova. The company tried to build a dealer network in Russia and Kazakhstan, but after 2013 decided to abandon development in those regions. Both economic (devaluation of national currencies) and political factors contributed to that.

After 2013, the company decided to refocus on Western markets, although there was no clear understanding what specific market to target.

Through collaboration with a project by the European Bank for Reconstruction and Development (EBRD), a consultant was involved to help Blest identify ten priority export markets including Germany, the United States and Canada.

In 2017, the company learned about the U CAN Export, CUTIS project export support program for SMEs, and decided to join it and fill a booth at the Canadian Furniture Show.

The assistance of Jacques Nadeau, a Canadian expert of TFO Canada, was specifically valuable to the company.

“Jacques provided us with detailed information about the specifics of the Canadian furniture market and helped us to choose the models that would be worth exhibiting. Otherwise, the company would need to conduct its own research. The CUTIS project did it for us and we are grateful for that”, Viktoria Semenets, Blest Exports Manager says.

Thanks to Jacques’ advice, Viktoria says, the company presented small convertible sofas at the exhibition that could be used both as a sofa and as a bed.

“We did not know the needs of the market and, thanks to Jacques, chose the best option. Furniture trends in Canada are changing. More and more Canadians, especially young people, live in small apartments in condominiums. That is why our convertible sofas fit them ideally”, Viktoria continues.

During the exhibition, Blest products received many positive reviews regarding quality and design. “People lined up at the booth to see us turn a small convertible sofa into a normal double bed”, Viktoria recalls.

The high class of Ukrainian products was appreciated not only by the visitors at the exhibition, but also by the organizers. The Ukrainian furniture booth designed by Sergey Makhno Architects was awarded with the Best New Exhibitor award at Canadian Furniture Show in 2018.

As Ms. Semenets states, thanks to the CUTIS project, not only was the company able to present its products at the largest Canadian furniture exhibition, but it also contacted local Canadian retailers and learned about their product mix.

The main conclusion was that Ukrainian products in the Canadian market are competitive pricewise and attractive due to their quality.

“Chinese companies are among the main competitors for Ukrainian products in the Canadian market. The store owners said that they were not always satisfied with the cooperation with Chinese manufacturers because the quality of products was not very high. Also, not all suppliers were reliable partners”, Viktoria shares her observations.

That is why Ukrainian manufacturers have every chance to occupy a niche of good-quality furniture of the mid-price segment.

“We continue to study and adapt to the needs of the Canadian market. For example, the standard size of mattresses in Canada is one and a half times larger than in Ukraine. It is important to take this into account if you want to develop your presence in the market”, Serhiy Savchenko points out.

Through collaboration with the CUTIS project, Blest has found a dealer in Toronto, IVI Furniture, with whom it has successfully partnered for over a year. IVI Furniture has its own showroom in Toronto where products from several Ukrainian furniture manufacturers are presented.

In October 2018, representatives of the Mega Group that brings together about 400 furniture retailers across Canada visited Ukraine and met with Blest representatives. Canadians highly appreciated the range and quality of Ukrainian furniture.

According to Viktoria, the partner company IVI Furniture recently signed a contract with the Canadian online furniture store wayfair.ca. “We are starting our cooperation with this platform, which will be an important milestone for the company to enter the Canadian market”, she said.

Currently, the company ships to Canada a container of furniture per month on average and does not intend to stop there.

“Demand for Ukrainian furniture in the Canadian market has increased by 25% over the first 8 months of 2019. Ukrainian companies are very flexible, they are ready to satisfy demanding consumers and adapt their products at the request of Canadian partners. For many Canadian suppliers, price remains a key factor in choosing a partner. Due to the Free Trade Agreement between Ukraine and Canada, Ukrainian furniture is competitive pricewise, so I see great prospects for Ukrainian manufacturers in this market”, Iryna Kobets, CEO, IVI Furniture concludes.