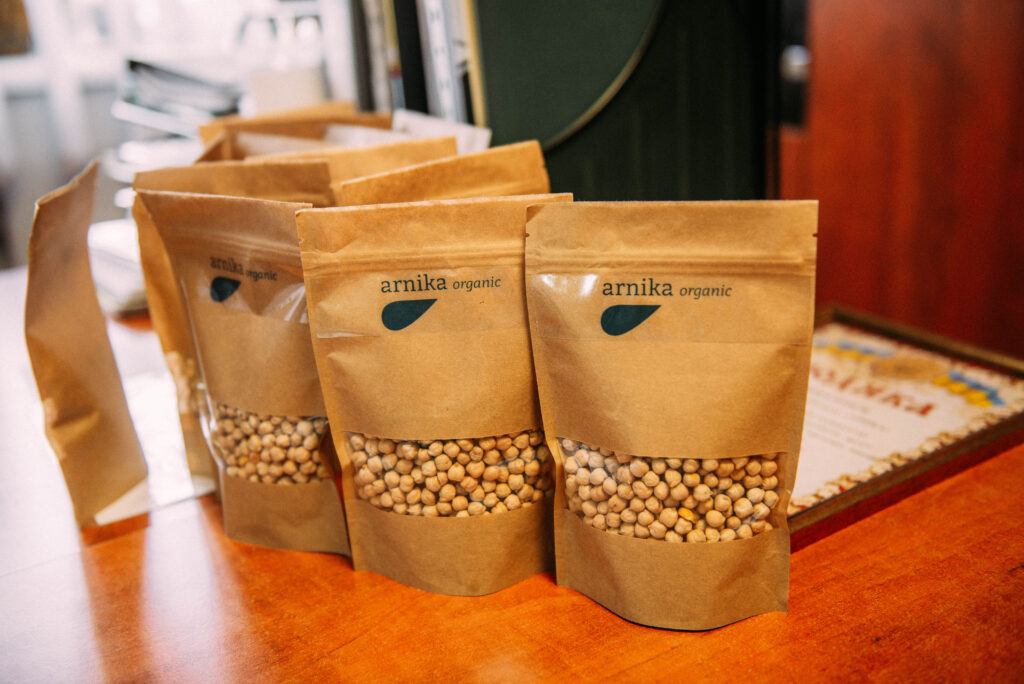 Companies that are part of the Arnika Agroindustrial Group really break the mould. State-of-the-art equipment, GPS-navigation of all rolling stock, sales of organic products around the world… You must admit, this is not quite what you expect to see in the rural areas of the Poltava region. The Group is actively developing, entering new markets and reaching out to such demanding consumers as Canadians.

Viktoria Vasylchenko, Head of Arnika Group’s foreign trade division, shares the secrets of production and commercial success in the Canadian and other markets.

Viktoria, we are very pleased that Poltava region is represented on the Canadian market. Tell us more about the businesses.

The companies in the Group were organized on the basis of former collective farms in the early 2000s and specialize in growing organic wheat, corn, soybeans, high-oleic sunflower and chickpeas.

On a by-order basis, we can “experiment” with organic millet, flax and hemp. The companies’ land under organic farming is up to 15 thousand hectares.

Why did you specifically start working with organics?

That was a strategic decision of Andriy Pylypchenko, the company’s founder. When the organic trend was just starting to pick up momentum in Ukraine, we began implementing organic production principles in separate areas, even without official certification. We were wondering if it would work out. Granit Agro was the first enterprise where we tried organic technology. Its specificity lies in the denial of agrochemicals and a greater emphasis on soil tillage. This requires higher capital and operating production costs.

The successful results of Granit Agro motivated other companies to switch to organics. Of course, this meant additional investment, but we could not do without that. The transition to organic business involves changing technological processes, logistics and operations. For example, up to 5-6 passes of machinery on the field may be required in soil preparation for planting organics. In contrast, a high production is achieved by pesticide spraying in the traditional agricultural production, which is much cheaper.

Investment in the modernization of machinery amounted to about US $ 10 million. In some cases, those were individual orders based on recommendations from our mechanics.

Control is another fundamental aspect of organic farming. This is where we are champions. The Group’s enterprises have a GPS navigation system, which allows monitoring dozens of vehicles online simultaneously. With this system, one can easily track all the processes on the farms over the last 3 years.

What are the main sales channels?

We focus on exports. We cooperate with many foreign clients, so our production is certified according to different foreign standards. For example, the Group’s three enterprises Agro-Sula, Granit Agro and Novomoskovsk Agro hold most of the certificates. These include BioSwiss (Switzerland), Naturland (Germany), JAS (Japan), COR (Canada), NOP (USA).

Another challenge is storage and logistics. We have to handle different batches of different crops produced according to several standards. God forbid to mix or confuse something! For managers of grain elevators, seasonal work is very complex.

Why was the Group interested in the Canadian market?

Currently, the demand from European customers does not cover all our production capacities. That is why we are constantly looking for new buyers. Priority is given to large grain processors. In Canada, we currently have several active contacts.

For the first time, Canadian partners were introduced to us by our European partners – a trading company with its headquarters in Canada. For some time, our products were resold. Subsequently, there was an opportunity to establish direct contacts with Canadian processors.

In the spring of 2019, some of our representatives traveled to Canada to discuss the details of further cooperation. We are currently working on the implementation of trial export contracts for those clients. Corn is the most in demand.

What are the features of the Canadian market?

Canadians do not really hurry. They carefully study their business partners and agree on small trial batches – up to 200 tons.

The fact that our owner has lived in Canada for some time and is aware of the specifics of the North American market and business culture was an advantage for us. We were prepared and understood the deliberateness of our Canadian customers.

It is important that you do not always have to go to Canada to meet Canadian buyers. For example, we have met them several times at European trade shows. However, it should be borne in mind that exhibitions are not for initial contacts, but for further specific negotiations and contracts.

Participation in exhibitions gives you a certain snapshot of recent market trends and tendencies. If you want to be successful, have a finger on the pulse.

Based on our positive experience, we plan to continue working in the Canadian market. Our advantage is the reputation of a reliable partner, openness and sustainability of our business.

What are the company’s competitive advantages in the Canadian market?

Canada’s climate in some regions is very similar to the Ukrainian climate. This allows growing organic grains of the same quality. Currently, the demand for organics in Canada exceeds available local supplies. Therefore, local processors are willing to buy organic grains abroad.

Our pricing is competitive compared with other suppliers as we are a direct manufacturer and can provide uninterrupted deliveries of consistent quality.

How did the cooperation with CUTIS help you enter the Canadian market?

A good tool summarizing information on the Canadian organic market has been the Manual published by the Project in 2018. Our representatives have also repeatedly attended public events on organic exports. For beginners, the information provided by the Project is really essential. Even experienced exporters can find many useful features, for example, potential buyer search tools.

Everything is simple and difficult at the same time here. For example, we tried to work with the Canadian Importer Database. We learned about this site from one of CUTIS’ presentations. We were patient and have done mass emailing to targeted Canadian companies. The result was not great. But it was at least something and it costed the company nothing.

In 2019, the CUTIS Project co-financed certification under Canadian organic standards for three of our businesses (Agro-Sula, Granit Agro, and Novomoskovsk Agro). This has definitely helped us to move forward.

For the products declared as organic, certification under the Canadian Organic Standards (COR) is mandatory in the Maple Leaf Country. Therefore, it helped us to some extent to overcome the regulatory barriers and provided the prospects of expanding sustainable agricultural practices in Ukraine.