BUSINESS WITH A CAPITAL B: A BUSINESSWOMAN FROM IVANO-FRANKIVSK GAINS ATTENTION AT CANADIAN AND EUROPEAN FASHION SHOWS 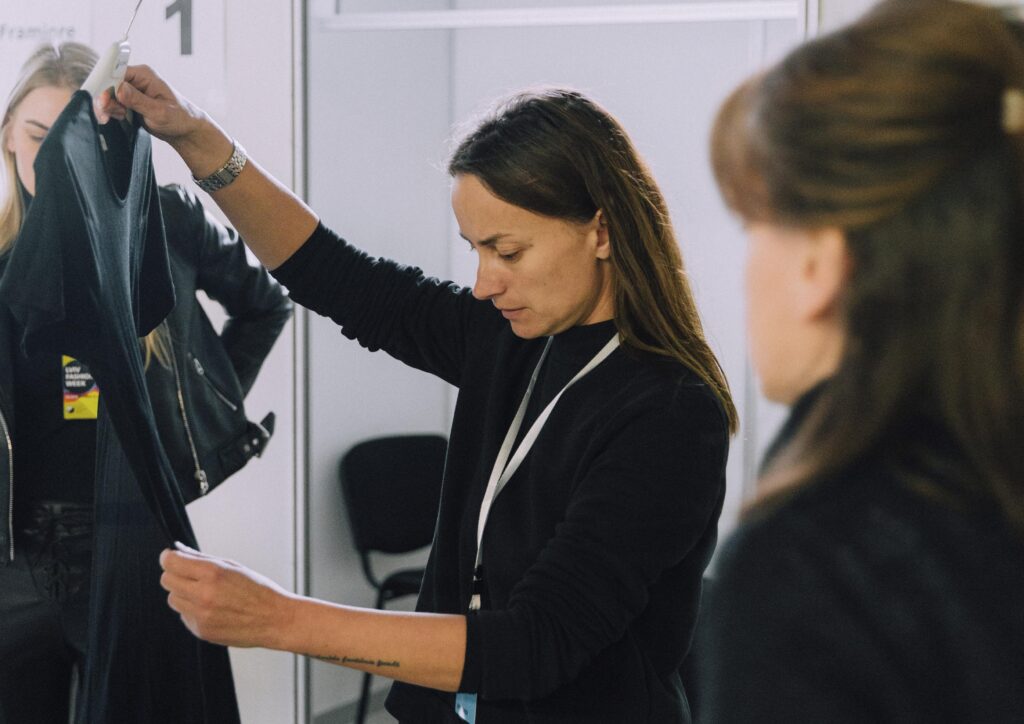 Getting from professional sport to fashion industry. Do you think it is impossible? Of course, possible! Natalia Nayda, a businesswoman from Ivano-Frankivsk, is sure of that. The story of Natalia’s business is the story of finding her place in the world, which started from producing hand-made postcards in 2008.

In the past, Natalia was engaged in cycling. She participated in competitions and organized various festivals together with her husband. In 2008, after her son was born, she decided to combine maternity leave with her own business.

It was difficult to start a business: finding a buyer for hand-made things in Ivano-Frankivsk proved to be a difficult task. “Nobody really wanted to buy postcards. People preferred Chinese ones for UAH 2.5 rather than ours for UAH 15”, – Natalia recalls.

The entrepreneur did not have any real startup capital. It was her husband who provided finances. In the beginning, materials were paid out of the family budget as well. Step by step, business rolled out and Natalia with two assistants started making fabric toys that were sold at Lviv stores. Social media helped as well, through which first small-scale orders came from abroad. This is how the hand-made crafts shop called Shuflia appeared.

The events of 2013 and the difficult economic situation affected many startup entrepreneurs. Hryvnia devaluation made Natalia think about making more «practical» products. She decided to focus on handmade notepads, wallets, and bags.

Development of Ivano-Frankivsk’s own municipal visual style in 2014 became an additional incentive. The city ordered souvenir products in the new style in Kyiv. «At some point, it seemed to me that having Ivano-Frankivsk products made in Kyiv was wrong. I decided that I want to make souvenirs in my native city. I purchased special equipment for applying ornaments. This is how the Bukvica brand was launched”, – Natalia shares her memories.

Why Bukvica? Probably not everyone knows that it is how the first letter is called at the beginning of a paragraph.

According to Natalia, the Bukvica project also became a new start for her – the craftswoman transferred from hand-made to craft products. Her team printed unique ornaments on T-shirts, magnets, caps, cups, etc. Patterns were designed by the craft shop’s own designer.

Over time, more and more customers started asking for a t-shirt with a unique print or logo. “At some point, we were confronted with the fact that there are no good quality t-shirts in the market and we thought why not sew them by ourselves? We bought sewing machines, found seamstresses and started. After some time, we wanted to expand the product line and began to sew sweatshirts and dresses. Little by little, we developed our own style and created our line of knitwear, which was mostly sold via the Internet. Later, there appeared also offline partners who bought our clothes”, – says Ms. Nayda.

Natalia tried to develop another area – decorating but was forced to quit it. Under the Tsvikli brand, Natalia and her colleagues engaged in the production of bouquets and decorating premises. “This business was strongly bound to the locality – we could work with flowers only in Ivano-Frankivsk. At some point, I wanted more: to use exotic flowers, while it was not easy to find a buyer for such services in a regional center in Western Ukraine. I do not regret, however, as I have gained an extraordinary experience”, – the businesswoman explains.

Natalia learned about new opportunities offered by the Canadian market and the CUTIS project for Ukrainian entrepreneurs from Facebook. “I saw the announcement on a selection of Ukrainian companies and decided to apply, although I did not really believe in success at first. Our production volumes were small, but we fitted by other criteria: our business was founded by a woman and the social component has always been important for the company», – she continues.

The selection process for the CUTIS Program became a turning point for Natalia and her team. At one point, a Canadian expert, Rodolfo Moseres, was invited to visit the company.

“I told him then that we would very much like to cooperate fruitfully with Canada, but our capacities were five sewing machines. Rodolfo convinced me that there was a place in the Canadian market also for small workshops that produce quality clothing with a unique style,” – says Ms. Nayda.

In January 2018, it became known that Bukvica and seven other apparel manufacturers were selected to participate in the U CAN Export Program of CUTIS. The first stage was participation in the Apparel Textile Sourcing Canada in Toronto.

It was Rodolfo who suggested thinking about an alternative brand name, since even a Latinized version of the name Bukvica was hardly perceived by the English-speaking audience. This was the beginning of the new Framiore brand.

Work on the new collection and trademark started after Natalia’s return from holidays in Asia where she was inspired by Asian motives, namely the Hmong people living in Vietnam. “By contrast with Bukvica, which has always been positioned as casual clothing, I wanted to focus on thoughtful design and fabric quality in the new brand. We decided to use only natural raw materials, particularly, tencel – environmentally friendly material made of the wood of Australian eucalyptus”, – says Nayda.

After several months of working on the new collection and consulting with Canadian experts, Natalia and her team realized that the new brand was too expensive for the Canadian mainstream market and the Toronto Trade Show, which was scheduled for August. Therefore, they returned to Plan B – to bring the cheaper Bukvica brand to Canada.

Together with four other Ukrainian apparel brands, Bukvica participated for the first time in a fashion show held as part of the exhibition. «Participation in exhibitions is extremely important for the companies that develop exports. One thing is to look on the Internet for information about popular brands and trends in Canada, and it’s totally different to go through the Canadian shops by yourself and understand what clothing consumers choose”, – Natalia says confidently.

This is actually what she did. With her colleagues, she put on Bukvica clothes, grabbed the catalogs and went to meet with representatives of small shops recommended at the exhibition. “Without such field research, it is impossible to correctly formulate the strategy of entering a new market. It’s cool that thanks to the CUTIS project we were able to go to Canada and chat with the owners of small stores and our potential partners. We understood their demands better and are ready to offer exactly the product that they will be interested in”, – Natalia says.

In her opinion, the main conclusion from the trip is that Ukrainian products are competitive in the Canadian market and can easily find their buyer.

There are certain limitations, however. “During the trip, we found stores that are potentially willing to buy our goods, but in small quantities, in trial batches. Canadian partners want to be sure that our cooperation is a long game. Ukrainian clothing manufacturers should understand that it is impossible to conclude a large contract right after the first exhibition. You have to participate repeatedly and position yourself as a reliable partner”, – Ms. Nayda continues.

The company is currently negotiating with a few Canadian stores and planning to participate in a trade show. “We will get orders for sure, we keep communicating. Negotiations with Canadians take much longer than what we are accustomed to in Ukraine. One has to be prepared for that. In addition, I would advise Ukrainian companies to visit not only Canadian but also American trade shows where many Canadian buyers are represented as well. This is my plan for the next occasion”, – points out the businesswoman.

After returning from Canada, Natalia decided to change her business structure. It was decided not to give up the Framiore brand. Moreover, the focus was exactly made on it with the view of entering Western markets. “The Framiore brand is specially designed for exports and foreign markets. Ethics of production and the slow fashion are exactly what the European and North American consumers need. Ukrainian consumers, unfortunately, are not ready to pay for that. So far”, – says Ms. Nayda.

The Framiore brand is already available in several offline stores in the UK. This became possible due to the company’s participation in the UK Moda exhibition in Birmingham in August last year. Five Ukrainian apparel manufacturers were represented at the UK exhibition with EBRD support under the EU4Business Program. “We already have several UK partners, things are already sold in London. We work on a pre-order basis. We do not want to produce to stock, there are millions of clothes in the world. Why sow even more clothes that may never be worn”, – Ms. Nayda states.

In addition, the company became one of the eight winners of the selection conducted by the Export Promotion Office. In February 2019, the Framiore brand will participate in a trade mission to France. The project is being implemented with the EBRD support within the EU4Business Program.

“Canada, US, UK and France are the very markets we are focusing on”, – Ms. Nayda says.

As for the Bukvica brand, its further development is more aimed at the local Ukrainian market, private label and corporate orders.

“Ukrainian products have great potential in foreign markets. We must overcome our own inferiority complex, improve quality and make the most of all the opportunities offered in Ukraine for small and medium business development. It is the experience of participating in a Canadian trade show that helped me to look at my own business differently and understand the importance of a systematic approach to entering foreign markets”, – says the Ivano-Frankivsk businesswoman confidently.