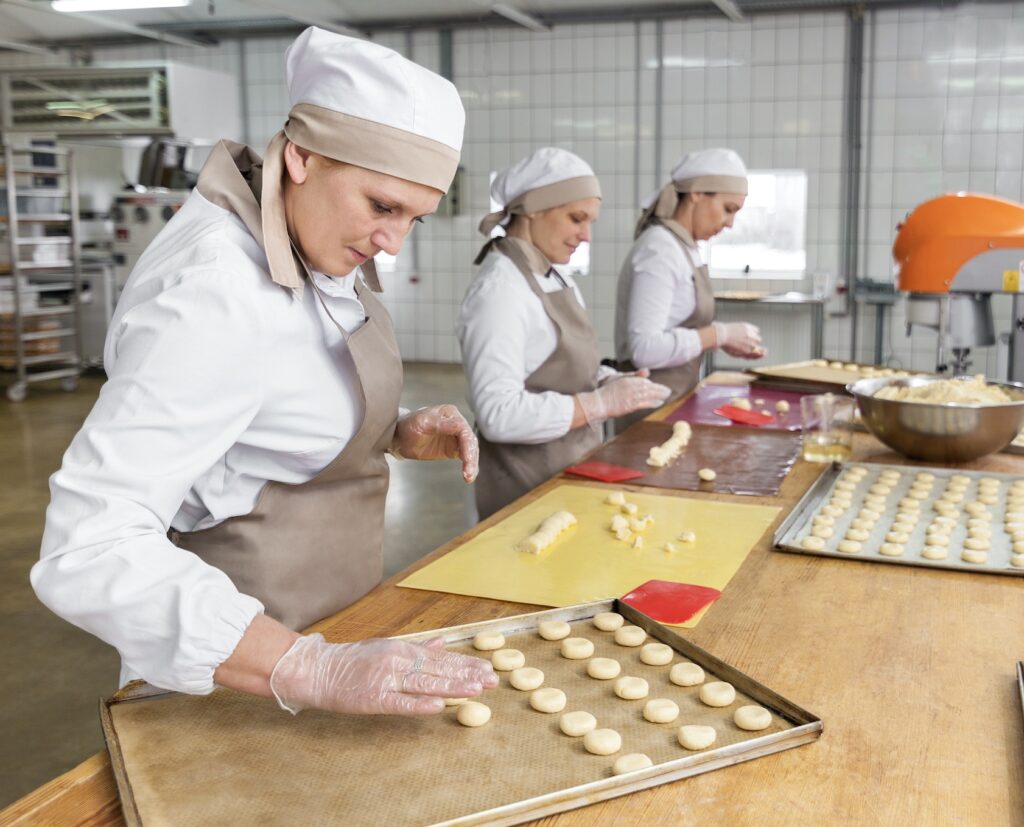 Ruslana Rymarska, owner of the family-run bakery Budmo Zdorovi (Smakuli cookies), decided to start her own business in 2009. Having defended her dissertation on international economics, Ruslana decided to put her knowledge into practice. “At that moment, it seemed to me that I knew so much. But as it turned out, I was a total dummy in business”, the entrepreneur says with a smile.

Ruslana’s business story began with natural yeast-free sourdough bread. “I wanted to make products that would be good for children. Later, while studying at a business school, I realized that the product had the narrowest place in the company, because the sourdough bread segment in 2010 did not yet have sufficient growth potential in this country. Ukrainians were not ready to pay an adequate price for it. While in Europe good natural bread costs 8-9 euro, we could not sell a loaf even for 1 euro. Shelf life and logistics were another issue. The production facility was out of town, and transportation costs eroded almost all profits, because the product’s shelf life is limited to 72 hours”, says the entrepreneur.

Ruslana was up to her neck in loans and had to sell real estate to pay off her financial obligations to creditors. Owning the equipment and premises, she decided to take the risk and not to close her business completely but re-profile it and quickly find a new product.

“Just before I started searching for an alternative, my nephew became allergic to wheat protein and cow’s milk, and my daughter had a temporary lactose problem. That’s how the idea of making gluten-free cookies came about as no one baked them in Ukraine, there were only imports”, Ms Rymarska says.

Participation in the Charie Blair Foundation’s Mentoring Women in Business program supported by the EBRD helped in building a new business. “During the first year of the program, I set the project goal to launch a new product. My mentor was a British manager from Accenture consulting company who helped me a lot with the “birth” of my product. The second mentor was an Australian entrepreneur with whom we worked on a marketing strategy and implemented corporate social responsibility”, Ruslana explains.

The implementation of plan B began in November 2015. European experience was actively studied, German and Ukrainian technologists were involved, and in December 2016, Ruslana presented a new product.

Initially, buyers were offered the national gluten-free Smakuli cookies through numerous B2C exhibitions (Made in Ukraine, Free from food).

“I understood that cookies had a limited consumer base in Ukraine but a great potential for growth, unlike bread. It was obvious that an efficient business strategy should focus on exports because it is simply impossible to grow faster than the market itself in Ukraine. In order to survive, one needs to keep developing a culture of healthy confectionery in Ukraine while earning money abroad, where the purchasing power is higher”, the Lviv entrepreneur says.

Ruslana understood: if you dream to enter foreign markets and cooperate with foreign trade chains, you need to do your homework and get on the shelf of Ukrainian retail. In 2017, Smakuli started cooperating with Eco Lavka, then Megamarket and NOVUS.

According to Ms Rymarska, the company managed to sign contracts with retailers quite quickly, within a month or two, although the process would usually take six months to a year. “What helped us a lot was the development of a healthy nutrition trend in Ukraine. As a rule, representatives of retail networks tasted products at exhibitions and fairs. Supermarkets started to make special shelves with organic and natural products and were ready to give a chance to our products”, Ruslana recollects.

Retail chains currently account for about 90% of sales and another 10% is individual small stores. Smakuli cookies are sold in Kyiv, Lviv, Dnipro, Kharkiv, Odessa and Mariupol.

The company employs 15 people in total: six in production, three in management, all others are outsourced. Production runs twice a week producing up to 200 kg of cookies per shift. “This is mostly manual work. We have machines that knead dough and ovens. Everything else is done by hands including the formation of cookies. When we have more orders, we will work more days”, says the owner.

The first steps in capturing the international markets were made by Ruslana’s family bakery in 2017 by acquiring international certification according to the ISO 22000 standard. “I learned about the Export Promotion Office (EPO) and started tracking interesting programs to prepare the product for export”, Ms Rymarska says.

The bakery team made a short list of countries with a developed gluten-free culture. Ruslana realized that there was no point in entering markets where the culture of lactose-free and gluten-free products was low. In addition, priority was given to the countries that allowed export of products under international certification ISO 22000.

The first international exhibition to present the Smakuli cookies was SIAL Middle East and the Sheikh Zayed Festival in the United Arab Emirates. “It was a certain maturity test to see whether customers like our products and whether potential partners would become interested”, Ruslana says. – Our cookies have aced the test. An UAE company ordered a small batch (one pallet of cookies). I was overjoyed”.

Further, in cooperation with the EPO, the bakery participated in trade missions to the UAE, Austria, the United Kingdom, Germany, Israel and Georgia.

In 2019, the Budmo Zdorovi bakery products were exhibited in Japan (FOODEX), the UAE (YUMMEX), and in Canada (SIAL). “Entering new markets requires adapting products to the needs of each of those particular markets. This is not cheap, especially for small businesses. After a series of trading missions, I realized that I needed to focus on one market, work it out and then move on. It was the exhibition in Canada that gave me such a chance”, says the entrepreneur.

The way to the North American market

Ruslana started thinking about entering the Canadian market back in 2017 when she first learned about the U CAN Export support program by the CUTIS project. “We applied to be considered, but were unable to get shortlisted for objective reasons. Our business was only a few months old, and it was a period of the company’s formation”, Rymarska says. However, like all applicants, Ruslana had an opportunity to join the program’s educational component and attend trainings of Canadian experts who visited Ukraine at the project’s invitation.

Early in 2018, Ms Rymarska attended the Gluten Free Expo in Vancouver, Canada. “This is the largest industry event for gluten-free food manufacturers in North America that sets the world trends. For me as a manufacturer, it was important to understand where the industry is moving towards, what market leaders are focusing on. I was convinced that the path chosen by my company was the right one”, says Ruslana.

Upon her return to Ukraine, Ruslana filled a questionnaire to include her company in the U CAN Export reserve list and was selected by the project to attend the SIAL in Toronto, Canada, in May 2019. CUTIS supported her company’s participation in the event.

During the trip, a series of B2B meetings were held with Canadian buyers that were organized with the assistance of Bertrand Walle, CUTIS Canadian confectionery expert. Ukrainian producers also received helpful sales advice during the information sessions and visited local supermarkets during the study tour organized by CUTIS.

“At SIAL, our products were very well received. There were always people at the booth, which proves interest in the products. This is not just sweet dough, this is a healthy product, plus its manual production made Canadians even more interested, Ms Rymarska says.

The SIAL show also organized a number of meetings for participants. “We had three meetings with US companies, of which one was interested in our products and we started negotiations on cooperation”, Ruslana says.

Negotiations on the delivery of Smakuli cookies to a US retail chain are currently being finalized, and samples have already been sent to the US. The family bakery is in the process of obtaining a US FDA (Food and Drug Authority) registration and approval of a label for that market.

The next step after entering the US market will be Canada. Even given the complex logistics, Ukrainian products in the US and Canada are more than competitive pricewise, the company owner noted.

“On Amazon, similar products costs USD 7-9, on the shelves of Canadian stores – CAD 5-7. We expect that Smakuli cookies will cost USD 5-6 in the US retail. In Canada even less because, thanks to the CUFTA, Ukrainian products are exempt from import duties”, Ruslana explains.

According to her, the bakery can export up to three containers per month with its existing facilities and is potentially considering expanding production.

In addition to business, Ruslana Rymarska spends a lot of time for public activities, in particular, supporting women’s entrepreneurship in Ukraine.

“I always wanted to do something meaningful. Previously, it seemed that this could only be done through politics. But at some point, I realized that I was already doing something important because my products are useful and delightful to those who have food restrictions. I am driven by this awareness, and I want to share this drive, as well as the accumulated knowledge, with other women entrepreneurs”, Rymarska says.

Ruslana, as a mentor, is involved in the SHEforSHE business women’s support program of the CUTIS project, which aims to support Ukrainian business women and help them promote their products in foreign markets.

“As Madeleine Albright once said, there is a separate place in hell for women who do not help other women. That’s why I’m trying to help”, the Lviv businesswoman sums up.