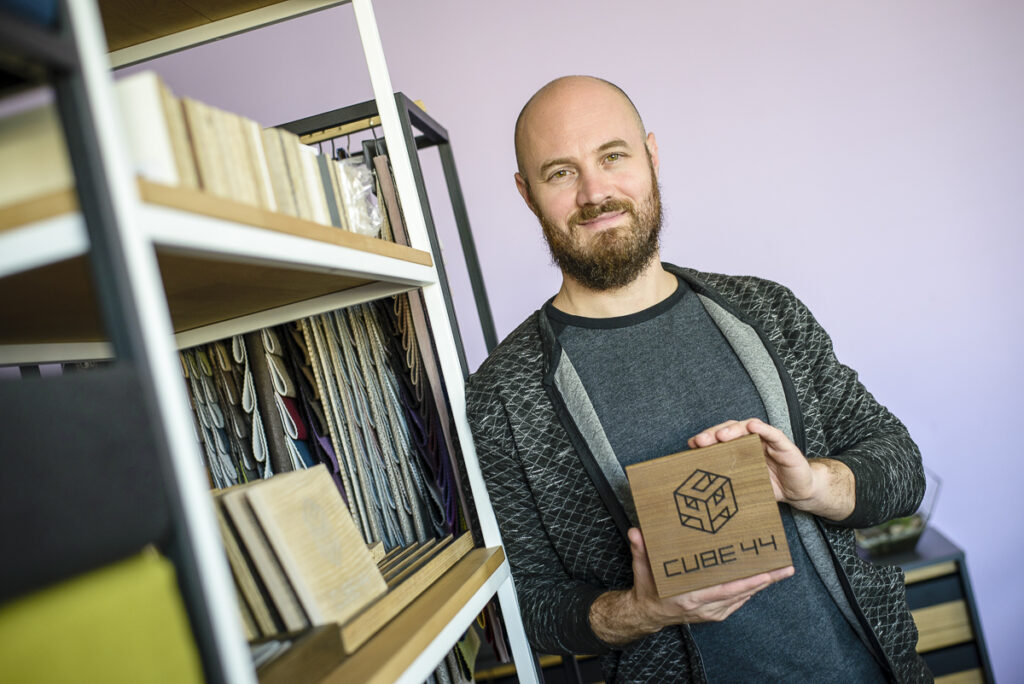 In early 2014, Dmytro Ignatov, a co-owner of Cube44 – a workshop of designer furniture, did not even suspect how radically his life would change in the near future. Dmytro had lived with his family in Donetsk and was engaged for more than 10 years in the advertising business.

“Our main clients were large Ukrainian and international companies. After the armed conflict began, most of the projects were suspended. Nobody understood what would happen next and how to do business under new conditions”, – Dmytro recalls. It was clear that large-scale marketing campaigns were out of the question. International companies began to roll out their business in the Donbass.

When the situation began to heat up, Dmytro decided to move with his family to Kyiv. “We had friends here who promised to help with housing, among other things. We took the most necessary stuff, left our apartment in Donetsk and went to the capital. At that time, you could still safely leave Donetsk “, – says Dmytro.

After moving, Dmytro tried to continue his career in advertising business and contacted his colleagues from the head office. However, the projects they offered were not very attractive, there was not much to do, and he had to make a living somehow.

“I always liked doing something with my own hands for my parents and friends”, – Dmytro says. The furniture business literally began in a garage where he made simple furniture and decor items.

“I was looking for interesting and not very complicated ideas on the Internet and then implemented them in my own way. As a rule, those were wooden things – sofas or shelves. Since there was not enough money, the purchase of good quality materials or development of complex projects was not discussed. The business model was very simple: get an order, buy wood in the market, make a simple sofa. I would post successful examples in social networks, through which new orders started to come”.

“After several successful orders, it became clear that furniture is not only a hobby. This is a business that can bring in money “, – Dmytro shares.

Among other things, Dmytro associates his initial success with the lack of simple and interesting minimalistic solutions in Kyiv’s furniture market. There was a lot of so-called “classics” in the market, but finding a simple table in the “loft” style was difficult.

The number of orders grew and Dmytro could no longer cope with them by himself. At the end of 2014, his friend joined the business and the first two employees were hired. The future furniture workshop also received the first permanent orders – the young men made furniture, showcases and stands for the shops in the Kyiv Darynok Shopping Center.

However, the partnership did not survive and Dmytro decided to continue business alone. This time, he took a more serious approach: to develop his own workshop under his own brand. Friends from the advertising business helped to design a logo, a font and a corporate style.

“The name of the company appeared spontaneously. Since the first furniture was made of wood, the first thought was to associate the name with the English word “wood”. Then I thought: business can grow, furniture will not only be made from wood and the name could not be changed afterwards. Furniture is usually square-cut so why not use the word “cube”? Quads always brought me good luck and if you turn 4 upside-down it looks like a chair. This is how Cube44 was born, – Dmytro says.

Business continued to grow and Dmytro realized that there was no progress without a good team. He started looking for personnel – specialists in metal and wood processing. Thus, the team grew up to 7 people. The number of orders grew as well, so the workshop moved to the rented premises, and a website was developed.

“I already had experience in managing people, a vision of a business development strategy, and the arrangement of a workshop”, – Dmytro recalls.

Further development of business was influenced by Dmytro’s meeting with a famous Ukrainian designer – Pavlo Vetrov. “I realized the need to develop, and, therefore, attended various design presentations. At one of them, I saw the furniture designed by Pavlo. I liked it. I decided to come up and offer cooperation. Surprisingly, Vetrov immediately agreed to develop a few models for us”, – says Dmytro. – After a couple of weeks, the designer sent us the first sketches that later became the basis of the first joint collection called Horizon. By the way, furniture from that collection is still in great demand both in Ukraine and in the western markets.

Collaboration with a well-known designer helped Dmytro to establish contacts with a number of furniture salons, as well as professional websites specializing in the sale of designer furniture.

The increase in the number of orders made Dmytro seriously think about further expansion, but that required funds, which the entrepreneur did not have. Dmytro did not want to ask friends or relatives so he decided to find a partner, which, fortunately, he did successfully. The new partner became a co-owner of the business, but operational management completely remains Dmytro’s responsibility.

Thanks to the partner’s investments, there was a significant expansion of business in 2015. The company bought its  own premises, purchased new machines, invited new specialists invited,  and even got its own minibus. The products also became more diverse – upholstered furniture was included into Cube44 production line.

Dmytro does not specify the size of investments. However, he estimates that capital investments are required for more or less large-scale production at the level of $200,000 – 300,000. “My experience suggests that availability of large capital is not a prerequisite for start-ups. My initial investment was UAH 2,000 to buy a screwdriving machine”, – Dmytro recalls with a smile.

In the face of shortage of working capital, Dmytro advises start-up entrepreneurs not to try doing everything by themselves but work with contractors. “We used to contract welding and sewing pillows for furniture out to our partners. Now we do it on our own. However, we still outsource such stages as dyeing or laser cutting”, – the entrepreneur says.

Three years is still insufficient to pay off all investments, but the company has already broken even. “At the moment, we are a fully financially independent company that focuses on design solutions. We have already moved away from the Loft concept and position ourselves as a workshop for designer furniture”, – Cube44 co-owner says.

The company has also “outgrown” custom-made furniture and develops its own collections in cooperation with Pavlo Vetrov. Exceptions are made for large corporate clients who order more than ten items at a time. “At the moment, we have six different collections and produce more than 100 items. We work in different price categories: there are both more expensive and more affordable collections. Most recently, we have developed the Easy collection, in which natural veneer was replaced with chipboard, which allowed reducing the price significantly”, Dymtro notes.

Materials used for the furniture are mainly of Ukrainian produce. Exceptions are fabrics imported from Turkey. Sales channels include their own website, online and offline partners. The company does not have its own stores. According to Dmytro, the price of furniture will be the same, regardless of the channel through which buyers purchase Cube44 products. “We have recommended prices, of which a percentage is received by the partner. The percentage varies depending on sales volumes and specifics of cooperation with the partner”, Dmytro explains.

Despite the fact that Cube44 products can be found not only in Kyiv but also in Odessa, Kharkiv and Lviv, major sales occur in the capital (more than 80%). The main buyers are young people aged 22 to 40, with the average (or slightly above average) income who prefer minimalism, practical and convenient solutions.

The company started seriously discussing exports in the summer of 2017 when it hired an export specialist and began to place products on international marketplaces, such as Etsy.

At the same time, Cube44 learned about the opportunities offered by the Canada-Ukraine Trade and Investment Support Project (CUTIS) to small-scale furniture manufacturers. The project selected Ukrainian companies to be presented at the Toronto Furniture Show in May 2018.

“We prepared all the necessary papers, passed several phases of interviews, our company was visited by a Canadian expert, Jacques Nadeau”, – Dmytro says.

According to Dmytro, this was an extraordinary experience for the company because Cube44 products had never been presented at international exhibitions abroad before. A significant role was played by the fact that the project provided financing of furniture delivery to Canada and covered the cost of the exhibition stand.

Ukrainian products have undoubtedly impressed Canadian buyers, because all items exhibited on the stand were sold on the first day of the exhibition. There were also many useful contacts established, which the company representatives continued to pursue after returning to Ukraine.

“The main thing is that we understood that our products are of interest to the Canadian consumers and competitive on the Canadian market,” – Dmytro says.

They did not manage to continue cooperation with the partner who had bought the furniture from the stand. Active cooperation, however, began with another company that became Cube44’s exclusive representative on the Canadian market.

The website was adapted and marketing materials were developed specifically for the Canadian partner. Already, in September 2018, Cube44 sent the first container to Canada. At the time of shipment, about 20% of the furniture has already been sold.

Further sales will make it possible to understand what products are most demanded in the Canadian market. “Based on this analysis, we will assemble a new container, hopefully more than one”, – Dmytro notes.

The Canadian partner is based in Toronto and plans to develop both online and offline channels for selling Ukrainian products. Creating a separate offline store specializing in Ukrainian furniture is being considered.

The price factor is also important. Even taking into account logistics, expensive rental of warehouses in Canada, partners interest, etc., Ukrainian furniture is competitive pricewise on the Canadian market. “A lot of furniture from China was presented at the exhibition. There were European manufacturers and several Canadian companies. Our quality is in no way inferior. Moreover, in many aspects we were even better”, – Ignatov says. According to him, retail prices for furniture in Canada are several-fold higher compared with prices in the Ukrainian market. Of course, there is top-quality designer furniture in the Canadian market but its price is significantly higher than the cost of Ukrainian designer products.

“Ukrainian furniture is very well received by Canadian consumers. The Free Trade Agreement canceled import duties and simplified shipment of products to Canada. We had no problem with the registration of cargo. I think Ukrainian companies should take a more serious look at this market”, – Dmytro says.

Collaboration with the CUTIS Project became a kind of a trigger that launched further negotiations with international partners. “After participating in the trade show, we started meeting with interested companies from France, Germany and Poland. Moreover, those companies themselves contacted us. We are currently conducting active negotiations with them”, continues Dmytro. Customers from Poland and France have already made their first orders.

Development of export operations poses new challenges for the company. “Foreign partners who visited our company like what and how we do, but they want to be sure that we will be able to complete the order on time and to the full extent. Therefore, we are considering further expansion of production and negotiating with potential investors”, – summarizes Dmytro.