A DECISIVE STEP TOWARDS THE CANADIAN MARKET: THE STORY OF KADAR, A SHOE MANUFACTURER FROM LUTSK 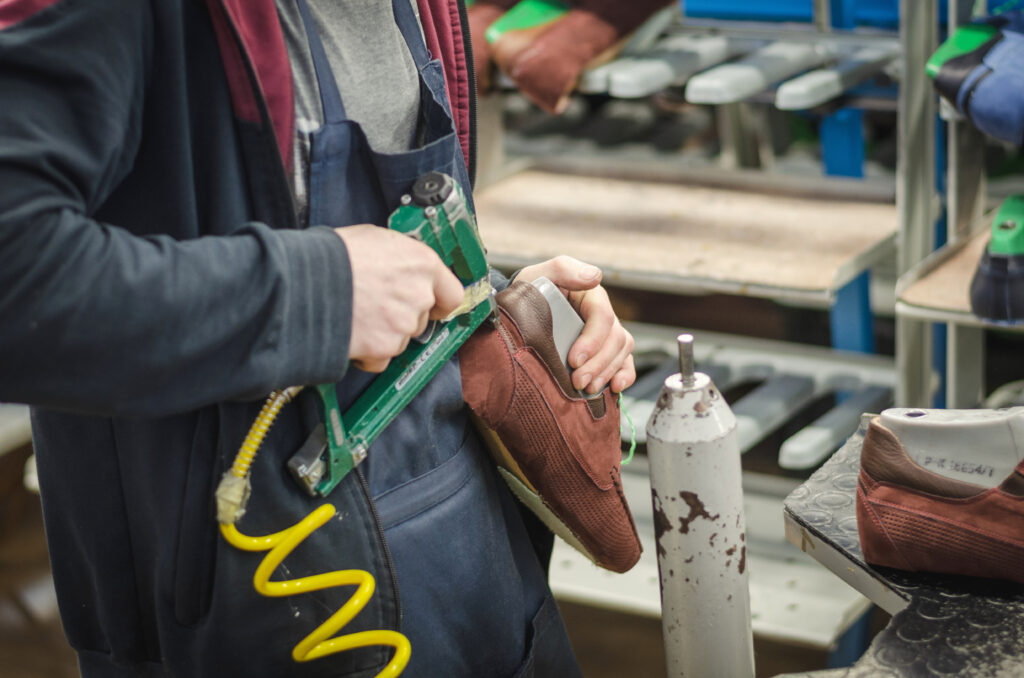 The history of KaDar, the largest footwear manufacturer in Western Ukraine, began more than 20 years ago. In 1999, four partners decided to launch their own footwear business starting from a shoe factory in Lutsk. After an unsuccessful attempt to work on a give-and-take basis, the production was idle for some time.

“I had no experience in the production of footwear, although I had experience in trading. At first, it helped a lot. Six months later, our fourth partner decided to quit the business and I bought out his part”, – Viktor Shulgach, CEO and co-owner of the company, recalls.

Design is the main thing

The business quickly grew and, five years later, the company was producing 150-200 pairs of shoes a day. Currently, the production capacity is 500 pairs a day.

From the very beginning, KaDar was focused on men’s leather shoes. The women’s line appeared in the company’s product mix in 2012, first, in a limited quantity. Presently, the share of women’s shoes is about 30% and continues to grow.

For its production, the company uses Ukrainian, Chinese and Italian materials, with an increasing share of Ukrainian raw materials. Leather is bought both in Ukraine and abroad. “The manufacturer has to choose the suppliers that will bring competitive advantages. The cheapest solution is not always the best”, – Mr. Shulgach is sure. In the footwear business, it is the design rather than the price that is the key, and KaDar does the design in its own studio.

Export as a new stage of development

Ukraine remains the main sales market: the domestic market accounts for 2/3 of the company’s total sales.

The first deliveries of KaDar’s products abroad took place in 2012. “The main purpose of export development is to diversify the risks of working in a single market. If problems occur with a market or a client covering more than 50% of sales, these become your problems. That’s why it is optimal, in my opinion, to increase the company’s share of exports from the current 30% to 50%”, – Viktor notes.

First, the company decided to try the Russian and then the Kazakhstan market. However, the co-operation failed for both political and economic reasons.

There was a successful entry in the Belarusian market and then the markets of the Baltic States. The company also made its first steps entering the markets in Poland, Slovakia and Hungary.

According to Viktor, there are no universal rules for successful entry into a new market. One must adapt to each country and adapt the products based on local consumers’ tastes. “It is important to establish contacts with market operators. Moreover, these companies should have grounds to trust you. They must be sure that your company is a reliable partner”, – Shulgach is certain.

Canada is interesting for KaDar as a great opportunity to diversify exports and reach the wider North American market. That is why the company decided to apply to the U CAN Export Program supported by the CUTIS project.

In January 2018, it was announced that KaDar and seven more Ukrainian footwear manufacturers entered the program, the first stage of which was to participate in the international exhibition – Toronto Shoe Show in August 2018. The CUTIS project has taken on the costs associated with the exhibition and the organization of booths.

“We started to prepare six months in advance. My partner visited the previous exhibition, so we knew what to be prepared for, and we created the action plan. We tried to maximize contacts with companies that could be interested in our products “, – Viktor says.

The product mix is a separate issue. Potential clients should see what they may be interested in. The U CAN Export participants were supported by Phil Zwibel, Canadian expert provided by CUTIS, who helped with the selection of the most relevant samples. During the exhibition, a number of B2B meetings were organized.

The company is satisfied with the results of the trip. “We got the first contract – about 500 pairs of shoes. In terms of the company’s total exports, the order is small, but extremely important as this is the first step in promoting our products in the Canadian market. Thanks to the participation in the exhibition, we got a better understanding of the demands of Canadian consumers and started a negotiation process with operators in the Canadian market”, – KaDar CEO says.

Could this have been achieved without a trip to Canada and the cooperation with the CUTIS project? Viktor Shulgach does not think so. “Unlike Ukraine, where the share of small distributors is quite large, the lion’s share of the footwear market in Canada is occupied by chains. It is almost impossible to target them without a previous participation in one or preferably a few exhibitions”, – he says.

After returning to Ukraine, KaDar representatives began vigorously developing a new collection of winter shoes adapted specifically for the Canadian market. The company notes that the new collection was developed not so much at the request of a specific Canadian customer, but in view of the future development of exports to Canada. Therefore, they tried to consider extensively all the wishes and suggestions expressed by potential partners and importers during the first exhibition in Toronto.

For example, the new collection is resistant to the severe Canadian climate being made of waterproof materials. “For Canadians, this is extremely important. About 90% of the visitors of the booth were interested in the materials’ resistance to moisture. At Ukrainian exhibitions, this issue has never occurred”, – recalls Halyna Panas, KaDar’s Export Development Manager. According to her, shoes for Canadian consumers should be as comfortable as possible, sporty or casual.

The company had a chance to see to what extent the new collection met the expectations of Canadian consumers at the end of February 2019 at the second Toronto Shoe Show, which became the next stage in the implementation of the U CAN Export Program.

Ukraine was represented at the trade show by six leading shoe manufacturers. KaDar’s products were placed in a double booth.

According to Halyna Panas, the company sees good prospects for the development of footwear exports to Canada after receiving a lot of positive feedback about their products.

“The first order was successfully completed – as we speak, our products are being shipped to Montreal. The second contract is in the final discussion stage. We do everything possible to ensure that Canadian distributors appreciate the high quality of Ukrainian shoes and we believe our cooperation with them will be successful. The most important reward for us will be the customer’s appreciation and the recognition of KaDar as a trusted business partner. Building successful business relationships with Canadian companies takes more than one day”, – Viktor concludes.