Much work to be done to up Ukrainian exports

Ukraine still has a long way to go to become a great exporter.

The country is still at its initial level of developing its export strategy and finding new markets. Outdated regulations, a poor financial market, a lack of business experience – all are holding the country back as it tries to compete in the global marketplace.

But despite the challenges, some progress was made last year.

In 2017, the country upped goods and services exports by 16 percent, or by $7.2 billion, to $52.3 billion. Exported goods alone increased by 19 percent, to $43.3 billion. Ukraine exported $17.5 billion to the 28-country European Union, and almost $4 billion to Russia. Other top export destinations include Turkey, India, China, and Egypt.

Nataliya Mykolska, the deputy economy minister of Ukraine, who is responsible for promoting the country’s exports, says that 2017’s exports increase was a good sign.

“We had an increase of almost 27 percent, but what’s most important is that we almost reached the pre-crisis level,” Mykolska told the Kyiv Post on March 21. This shows that Ukraine’s association agreement with the EU, which came into force in September last year, is working. “It’s not only about the increasing value of our exports, but also the increasing number of our companies that are exporting to the European Union.”

After the provisional agreement with the EU came into force, the number of Ukrainian companies exporting to the union doubled, to more than 14,100 companies, she said.

Denys Krasnikov, the vice president of the Ukrainian League of Industrialists and Entrepreneurs, or USPP, one of Ukraine’s largest unions of businesses and organizations, says it makes much more sense for Ukrainian companies to enter developed markets.

Krasnikov, has been at USPP for more than 15 years, and over the past few years has focused his efforts on export promotion.

“About four years ago we understood that there was a lot of pressure on Ukrainian exporters in the eastern markets, and we had to start a really serious move forward to find new markets and new opportunities for our enterprises,” he said.

“We try to promote our companies mostly in developed markets, where there are more stable economies and more stable partners,” he said.

It’s much easier to enter Arab and Asian countries for companies that are professional and have good quality products, he said.

“But while you can enter such markets easily, it’s also very easy to lose these markets.”

Non-developed countries have more of a short-term contract business culture, where enterprises are ready to switch business partners regularly.

“Very often the situation in such countries is even less stable than in Ukraine, and so if we move forward to these markets, it means there won’t be a serious reorientation of the Ukrainian economy to other strategic markets.”

On the other hand, it is much more difficult to enter the European Union, Canadian or the U.S. markets, even with a good team and product.

“But if they start to work, it is much more stable” than working with other countries, Krasnikov said.

And once Ukrainian companies enter developed countries, and Ukrainian products are seen on the shelves of, say, U.S. stores, then other countries order these products as well.

For example, Ukraine’s Galicia, a juice company that sells its products in U.S. supermarkets, is now entering the Latin American and Asian markets. Another example is Ichnya, a producer of condensed milk that also exports to U.S. supermarkets and is now receiving offers from countries like Bolivia, Panama, and Mexico. 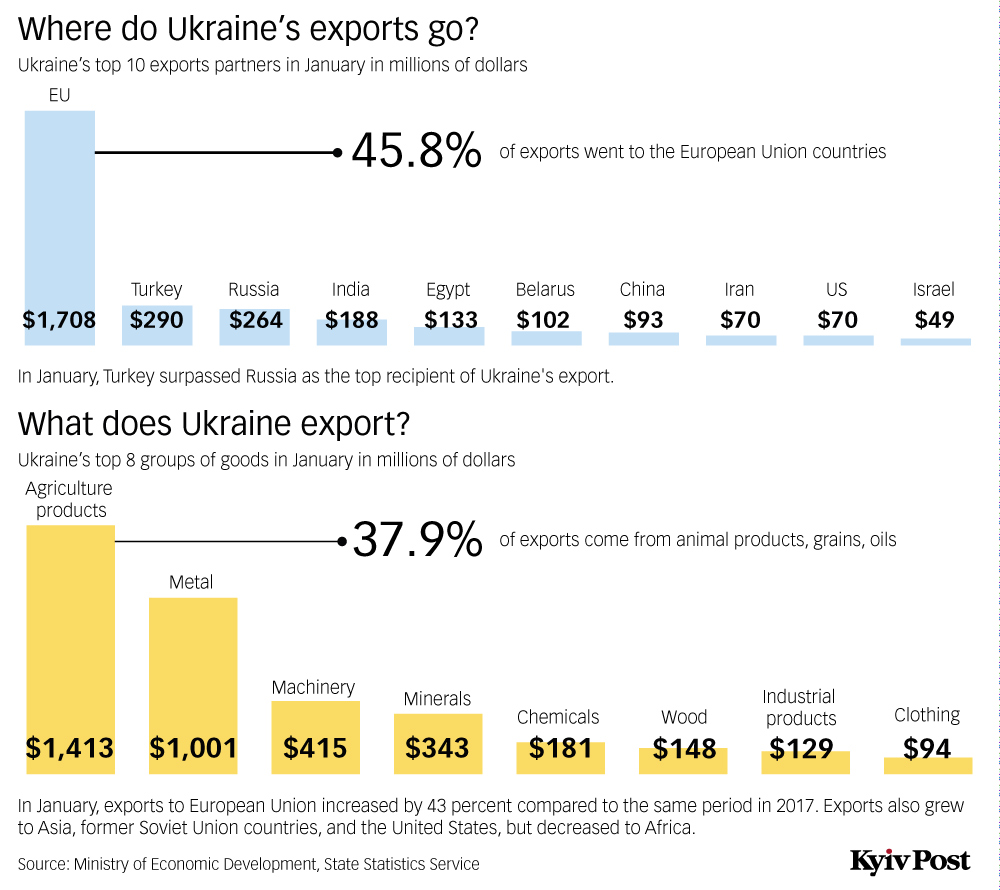 Ukrainian companies also have much more export success if they have professional contacts in the West who are familiar with Ukraine already.

“Only in this case do you have a real chance of starting to work with really big, serious players,” Krasnikov said. “Because if we estimate and analyze our exports to Canada and the United States, we see that most of these exports are between Ukrainian companies and former Ukrainians who moved to the United States.”

“Many of the Ukrainian companies present on the U.S. market for the past 15 years are there, and selling products, because former Ukrainians moved there.”

If there is no connection, then typically it is very difficult to start cooperation, because of perceptions abroad that Ukraine is still a post-Soviet nation with bad products and poor workers.

But even if a company does enter a Western market, Ukraine’s exports are still dominated by commodities, rather than finished goods of the type that could provide more added value for Ukrainian exporters.

Ukrainian regulations, including those of the central bank, the National Bank of Ukraine (NBU), are to blame, making it easier for Ukrainians to export raw materials while discouraging them from exporting finished products.

Instead, foreign companies come to Ukraine to source raw materials and collect the added value, opening offices to purchase raw materials for export to other countries.

For example, Ukrainian sunflower oil is sold on Amazon through a company called Sunvella for $8 per bottle. The Ukrainian producer only gets up to a dollar per bottle.

It’s the same story for Ukrainian exporters of honey.

“Unfortunately, Ukrainian exporters of honey get even less of the cake,” Krasnikov said. “If a U.S. customer buys honey for $20 per kilogram, Ukrainian companies supply honey at $2.50 per kilogram at most. So you can see the difference.”

The regulations for selling value-added products are “completely different,” Krasnikov said. “If you want to sell such products, you have to have representative offices in other countries.”

And establishing a representative office requires a license from the NBU. The procedure takes a lot of time, is heavily regulated, and a company must send all of its earnings to Ukraine within a 180-day period.

“No country in the EU or even among our post-Soviet neighbors has such a law,” Krasnikov said.

The requirement, designed to curb money laundering, might have made sense during Ukraine’s first years of independence, Krasnikov said. “But now Ukraine says it wants to be a part of EU, and to be open to the free flow of capital.”

Because of this over-regulation, many businesses have given up trying to export value-added products.

The requirement to send money to Ukraine within a 180-day period is a big problem for engineering exporters in particular, since many products, such as engines, need a couple of months of testing before a foreign client will pay for them.

“This is a really serious problem,” Krasnikov said.

And with a weak banking industry and local currency, as well as high interest rates, most Ukrainians cannot find any affordable and stable financing. Most are left with only one option – to finance their operations with their own money.

However, Ievgeniia Lytvynova, the CEO at Ukrainian Exporters Club, a consulting firm, says that the biggest problem for her clients is not so much NBU regulations, but rather phytosanitary and veterinary certificate regulations.

“The most important are of course veterinary agreements between countries, because they make it a lot easier to legally export Ukrainian goods… minimizing the cost of production, and increasing their competitiveness on the global markets.”

Mykolska, the deputy economy minister, said that the EU would like to see more progress from Ukraine in bringing phytosanitary regulations into agreement with EU standards under their Deep and Comprehensive Free Trade Area agreement, or DCFTA.

To do that, the country needs to reform its state sanitary and phytosanitary service, adopt several EU regulations, and strengthen its inspections of enterprises.

“At the end of last year and beginning of this one our parliament adopted a number of laws that are bringing our sanitary and phytosanitary regulatory system into compliance with the DCFTA’s requirements, and the same also applies to technical regulations,” Mykolska said.

But Ukrainian companies also need to “do their homework” in terms of investing in modernizing their own sanitary controls, and modernizing production facilities in order to comply with EU requirements, Mykolska said. 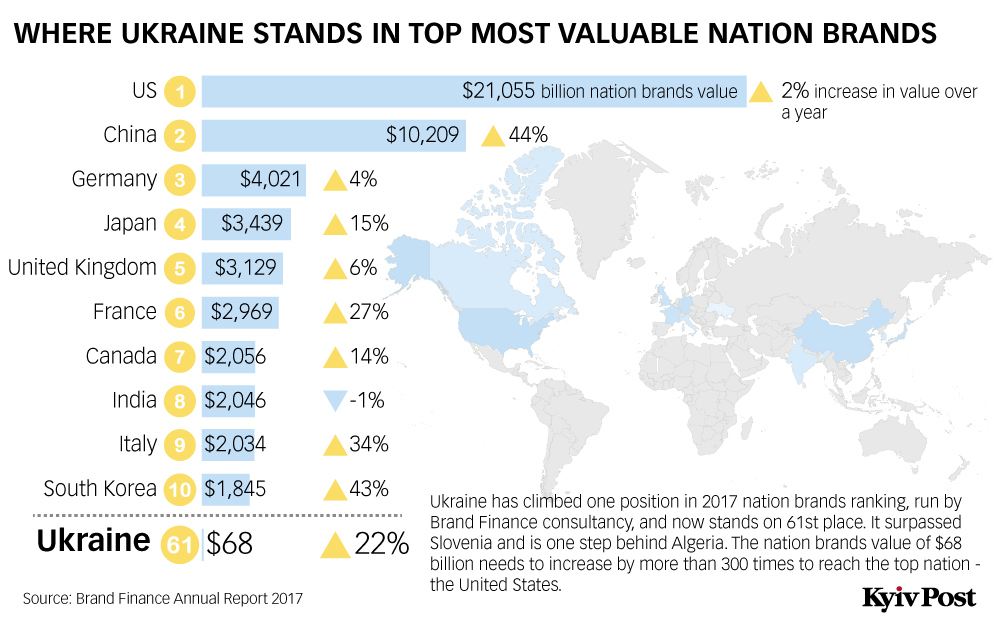 It is also difficult for companies to attend international trade shows and exhibitions, as a lot of bureaucracy is involved.

But not every company can afford to participate in such events, especially the smaller businesses, Lytvynova said.

“Exhibitions can be productive, but you need to choose them carefully,” she said.

Krasnikov says that the ministry did a lot of work, but mostly in terms of marketing the country’s image. The reform of export regulations, meanwhile, is being neglected.

“The government has to do everything that it needs to do, and not just marketing,” Krasnikov said. “The government’s marketing is only a very, very small factor in success.”

“Every time we talk about regulations, it looks like they find it just too difficult to understand,” he said. “We like what they do… but we have to keep criticizing them even more, and pushing our ideas forward.”